Most of my friends, even those who like The Lord of The Rings movie, don’t yet to know about this story, not before the movie came out at the end of last year. But, honestly, I have waited for the movie for about 10 years since the first time I read the book. I have been wondering for a long time since my elementary school, why don’t someone make the movie for this amazing book? The book is absolutely worthy to be a movie!

Though the movie was published after the blooming of TLOTR movie, the book was published before the writing of TLOTR entitled “The Hobbit: or There and Back Again”. The book was one of the first Tolkien’s writing, the first one which make his name remarkable in the heart of his reader. For those who haven’t yet to read and are looking forward to watch the next movie, I suggest to stop right here and just read my other book review.

The book tells about the adventure of Bilbo Baggins. He’s a hobbit, small creature, shorter even than a dwarf, quick in movement, have an ability to move almost without noise, likes eating, having party, and living peacefully, usually live in the hole under the hill or small house.

After reading the description, you may ask yourself, what kind of great adventure or story we can’t expect from this kind of creature! The great fantasy story usually has strong, handsome warrior, riding a horse with great sword in one hand and the silver shield in the other. The warrior who can kill many foul creatures, pass through the dark forest, and finally slay the dragon or defeat the dark wizard to save the princess. 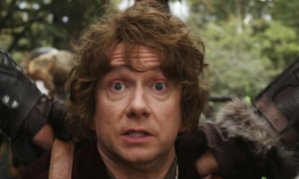 believe it: this is our main character!

If you expect that kind of warrior, you should just abandon the book and find another else. No, it’s not that kind of character you will find in this book. In contrary, you will have Bilbo as the main character, the “hobbit” who have never draw a sword except the knife in his kitchen before.

It’s not just you who are shocked of that fact. Bilbo himself had never imagined that he would have a part in the journey to the Lonely Mountain far in the east where he and his companions (consisting of 13 dwarves and a wizard named Gandalf the Grey) had to conquer the city of Erebor, the dwarves’ hometown as well as the treasure inside the city, from the dragon Smaug who destroyed the city and forced the dwarves to move out in the past. But it was not only the dragon who waited for them. The path they had to take was dangerous. They would have to pass the giant Trolls, the goblins of the Misty Mountains, the Warg Riders, the Giant Spider of Mirkwood, the Elven Kingdom, the city of Esgaroth or Lake-town before arriving at their destination. Beside, some evil power grew in the city of Dol-Guldur, where the mysterious necromancer hide.

this is our enemy! not fair!

It was in this adventure where Bilbo found the magical ring, the one which could make the bearer unseen or disappeared. The ring would help Bilbo through all the dangerous creatures waiting for him where the mission’s success depend on his bravery. 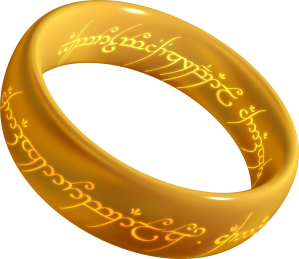 this magical ring will help Bilbo a lot

Actually, this book is one of my first novel collection along with the first book of Harry Potter. My father bought me this book with TLOTR. Because of the smaller font and darker paper of TLOTR as well as its thickness, I decided to read The Hobbit first. And I was amazed from the beginning till the very end. 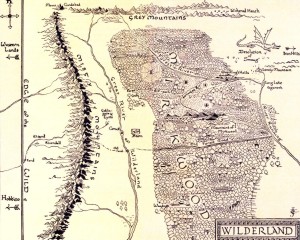 the long road Bilbo have to pass

Unlike TLOTR which actually rather complicated and full of complex conflict, The Hobbit is far easier to read. The conflict is simple and doesn’t consist of too many characters. It’s better book for the children like me at that time. It’s different from the movie version by Peter Jackson who I suppose intentionally make the movie darker and gloomier. I think, this is one of the reason why The Hobbit is more popular than TLOTR for the Tolkien reader at the first TLOTR publication in 1954.

Beside that, what make this book so meaningful for me is that the choice of the main character. Bilbo isn’t the usual warrior in other fantasy story as I describe  above. He’s just usual ‘man’ who don’t have power to overcome his enemy. Only the will to help his friends as well as the desire not to betray his friends’ trust which help him face the enemy one by one. It motivates me in my childhood that I, beside my shorter body comparing to others, can also be “a hobbit” who can change the world with my deed. Even the smallest creature will be able to change the world if he wants. So, let’s just change the world, guys!

In the end, I don’t wanna give more spoiler. Just read the book before it’s too late!

“There is more in you of good than you know, child of the kindly West. Some courage and some wisdom, blended in measure. If more of us valued food and cheer and song above hoarded gold, it would be a merrier world.” – Thorin Oakenshield, “The Hobbit”